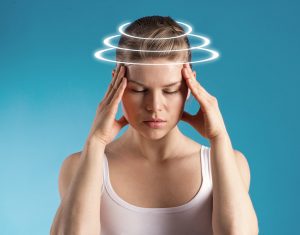 Benign paroxysmal positional vertigo (BPPV) is a common vestibular (inner ear balance) disorder that is characterized by a false sense of spinning or rotational movement which results in the feeling of dizziness. Benign paroxysmal positional vertigo typically occurs suddenly with no apparent cause, and each episode usually lasts only for a brief time when the head is held in certain positions. While BPPV is not considered to be a serious condition, the dizziness associated with it can be temporarily debilitating and cause unsteadiness and loss of balance. We also have a team of physical therapists that specialize in Physical Therapy and Vestibular Rehabilitation in Fort Worth.

Other symptoms of benign paroxysmal positional vertigo include:

Benign paroxysmal positional vertigo can affect people of any age, but is extremely rare in children and most common in patients over 50. When BPPV does present in younger patients, it is often a result of a head injury.

Benign paroxysmal positional vertigo is a mechanical problem in the inner ear which occurs when calcium carbonate crystals called otoconia become dislodged from the gel they normally rest in within the ear structure. These loose crystals can travel into one of the 3 canals of the vestibular labyrinth, the tiny organ in the ear which contains fluid and sensors that monitor head rotation.

While the symptoms are similar, it is important to identify what type of benign paroxysmal positional vertigo is causing the symptoms, as each variant of BPPV is treated differently. Oftentimes, BPPV comes on suddenly when a patient is older because, as we age, the inner ear is affected by natural wear and tear that has occurred over time.

Benign paroxysmal positional vertigo often presents when the head changes positions such as:

Other possible factors that may trigger BPPV include:

Because the crystals involved in causing benign paroxysmal positional vertigo do not appear in imaging tests, such as an MRI, achieving a diagnosis involves identifying specific symptoms particular to BPPV. The most telling sign that a patient has BPPV is the exhibiting of certain eye movements called nystagmus. These involuntary eye movements, which are triggered by the crystals traveling in the ear canal, are actually what creates the false spinning sensation.

The characteristics of the specific nystagmus will determine which ear is affected by BPPV, as well as which canal the crystals have moved into. Recognizing these signs often requires a medical professional who is trained in vestibular disorders, as treatment is dependent on crystal location. The patient may also be asked to lie supine and tilt the head in particular ways to determine which rotations trigger vertigo.

Testing for BPPV may include:

Both diagnostic tests may be utilized to determine accurate location of the crystal movement which will dictate the type of treatment necessary.

Learn about the treatment for Benign paroxysmal positional vertigo (BPPV).

If you have questions concerning dizziness and would like an appointment with one of our physicians at Fort Worth ENT & Sinus please complete an online appointment request or phone 817-332-8848.

COVID 19 UPDATE – For Your Safety

We at Fort Worth ENT take your safety as well as the safety of our staff as a number one priority. Because of the recent developments regarding the Coronavirus, we are implementing recommendations passed down from local and national entities in order to keep our patients and staff safe. Our staff will be screened on a daily basis and the highest standards will be taken in order to ensure a safe environment for patient care. In order to limit the number of people in the waiting room, we are asking that you come to your visit alone unless you are a minor or are not physically capable of coming to your visit alone. You will also have the option of waiting in your car and be notified by way of text when you are ready to be seen. Please read our Covid 19 Update regarding screening measures when you arrive at our office.

The Fort Worth ENT otolaryngologists are the official ear, nose, and throat physicians of the Fort … END_OF_DOCUMENT_TOKEN_TO_BE_REPLACED

On Monday, March 26th, 2018, Fort Worth ENT & Sinus will be moving into our new office located … END_OF_DOCUMENT_TOKEN_TO_BE_REPLACED