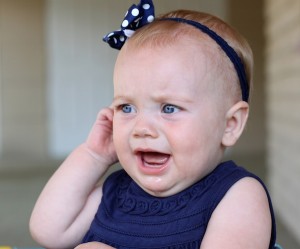 The eustachian tube is the natural pressure relief valve of the middle ear.  Dysfunction of this tube can cause a build up of pressure and/or fluid in the middle ear.  This can result in chronic ear infections and hearing loss, as well as problems with balance and speech development.  Ear tubes may be necessary if this condition does not respond to medical therapy.

Structure of the Middle Ear


When discussing otitis media, it is important to understand the anatomy of the middle ear. The ear is divided into three parts: the outer, the middle and the inner ear. Even though infections of the outer ear or auditory canal (often referred to as swimmer’s ear) do occur in children, the middle ear (typmanic cavity) is the location where most ear infections begin. The middle ear, also known as the tympanic cavity, is an air-filled space located in the bone of the skull. The middle ear is covered by a thin membrane know as the eardrum (tympanic membrane). Mucus membrane similar to that of the nose and mouth also lines the middle ear.

A narrow passage called the eustachian tube (auditory tube) connects the middle ear to the back of the throat and nose. The eustachian tube functions to control the airflow and pressure inside the middle ear. It lies closed and opens with the swallowing movement allowing air to enter the middle ear. This mechanism maintains a constant pressure gradient and replaces the oxygen that has been absorbed by the lining of the middle ear. Sometimes the pressure is not equalized with the environment outside. This can be felt on an airplane or at high altitudes and may cause some discomfort. 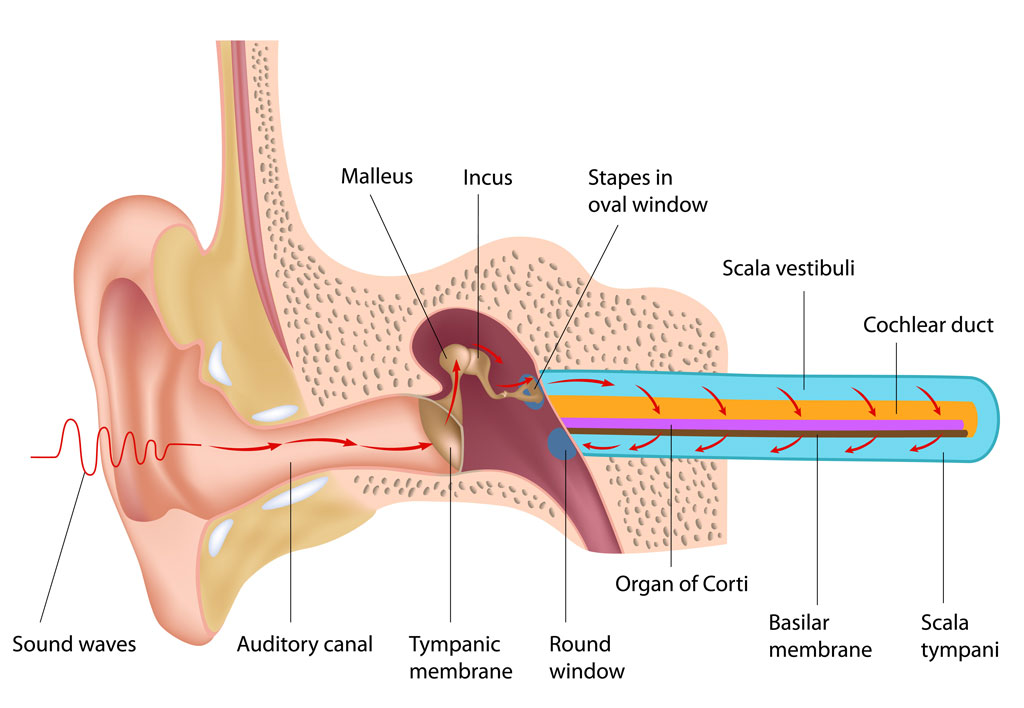 The tympanic cavity also plays an important role in hearing. Three small bones called ossicles are found in the middle ear. These bones form a chain and conduct sound vibrations from the eardrum to the fluid-filled inner ear. Sounds are then converted into nerve impulses and carried to the brain by the auditory nerve.

Extending from the air space of the middle ear is the mastoid bone. It is made of small, connected air spaces and resembles a honeycomb. The structures that are responsible for facial expressions and balance are found in this part of the inner ear. While the exact function of this bone is not clear, it is known to be involved in chronic ear infections. 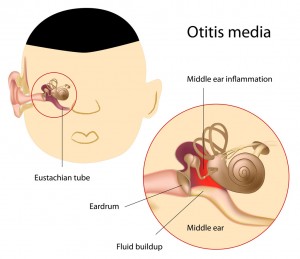 There are several types of otitis media that affect young children. 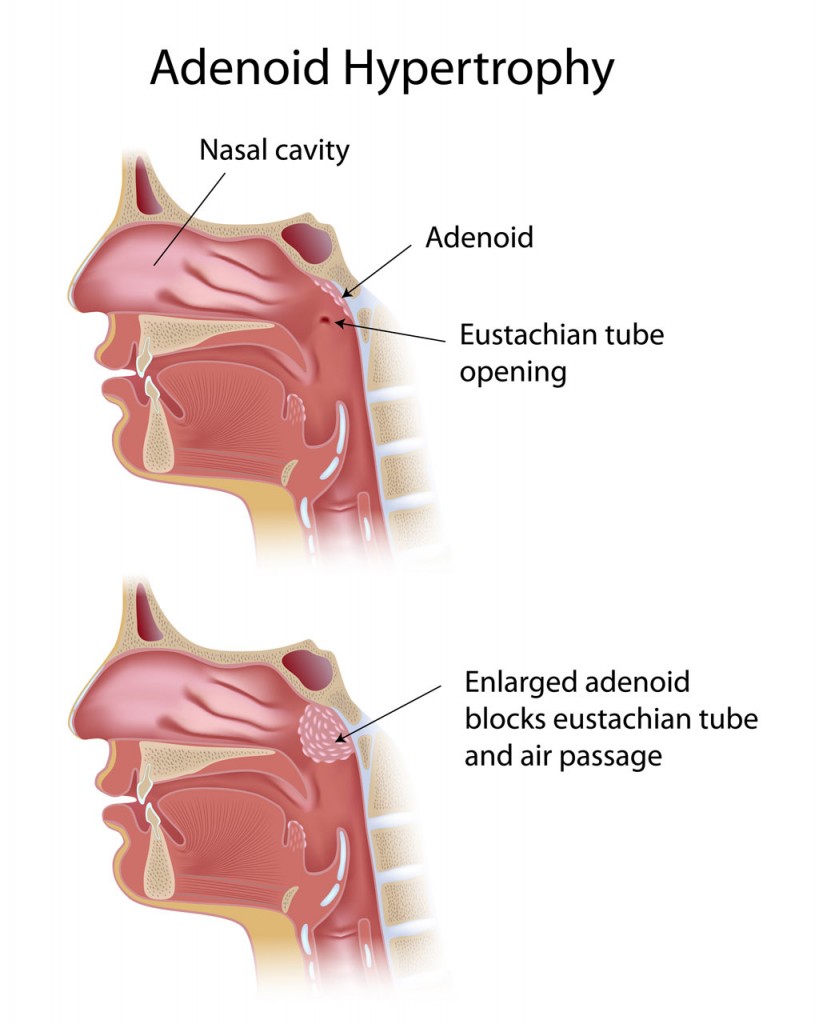 Other factors can also increase the likelihood and frequency of Acute Otitis Media (AOM) in children.

Symptoms of Acute Otitis Media (AOM) can vary depending on the age of the child and the severity. You may notice some of the following symptoms in your child: 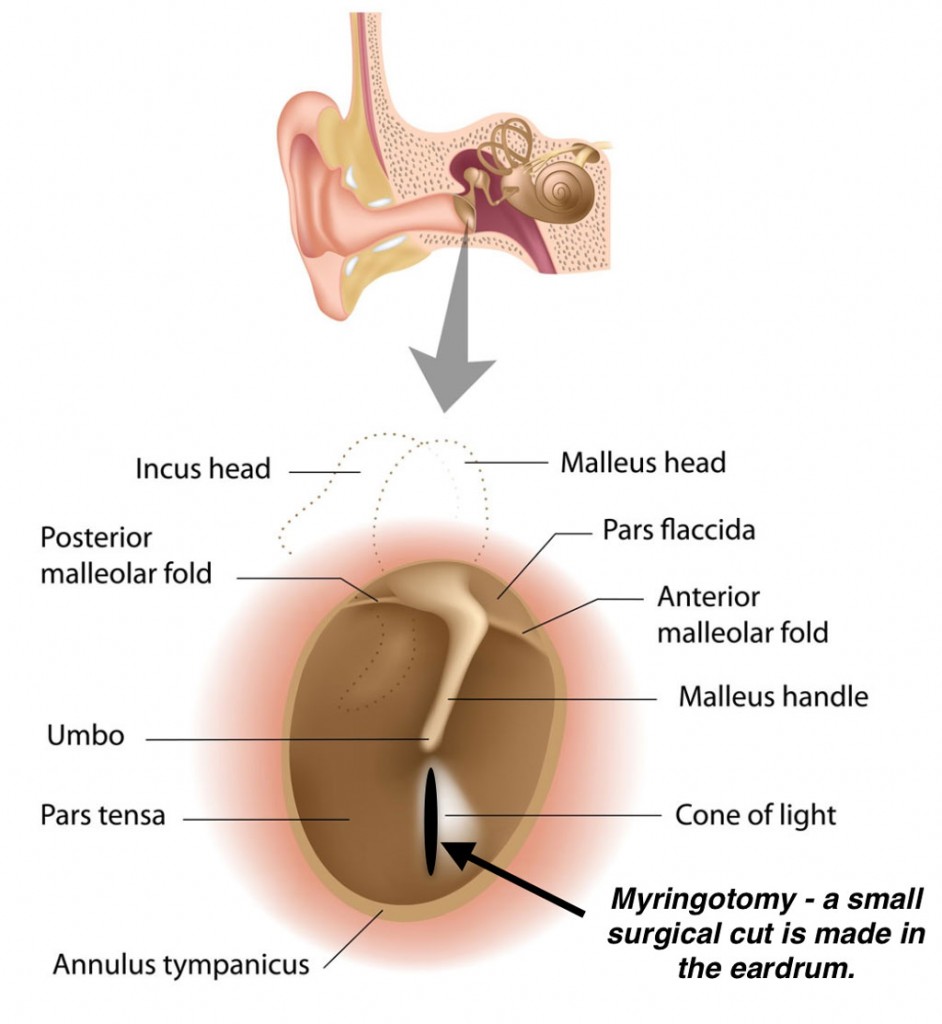 Your child’s pediatrician will usually diagnose your child’s ear infection. If needed, your child may be referred to a pediatric ear nose and throat specialist. Your child’s doctor may use the following methods to diagnose acute otitis media: 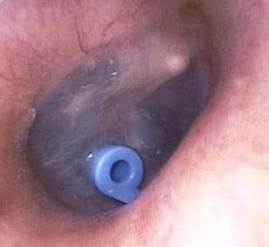 Sometimes, acute ear infections resolve without medical treatment. Home care methods such as placing a warm, moist cloth over the infected ear and using over the counter eardrops and pain relievers can help.  Often, however, medication is needed. Your child’s doctor will likely prescribe antibiotics, which are extremely effective in fighting ear infections. Typically these mediations are taken for 7-10 days along with Ibuprofen or Tylenol for pain. If the ear infection does not respond to antibiotics or if more episodes of acute otitis media occur, surgery may be recommended. Your child’s doctor may recommend removing the adenoids if they are enlarged or infected. Your child’s doctor may also suggest myringotomy and ear tubes, which are tiny tubes surgically inserted into the ear to allow for better airflow and function of the eustachian tubes. 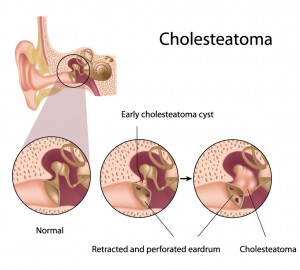 In general, chronic otitis media develops over a long period of time in children with persistent ear problems. In rare cases however, it can develop over a short period of time with no previous history of ear infections.

The symptoms of COM can include the following:

Some symptoms are more serious and require immediate attention:

Diagnosis of COM typically involves an extensive evaluation by a pediatric ear nose and throat specialist or otolaryngologist. The doctor will take a history and examine the ears, nose, and throat. Additional tests may be ordered depending on the symptoms, severity of the disease, and findings. Common tests include tympanometry to determine if the eardrum has ruptured, audiogram if hearing loss is suspected, and imaging test such as computed tomography (CT) scans and magnetic resonance imaging (MRI) to look for mastoiditis or cholesteatoma.

Treatment for chronic otitis media depends on the stage of the disease and the type of the damage that has occurred. Initially, efforts are made to control the cause of the eustachian tube blockage. Chronic fluid in the ear is typically treated with antibiotics. Often, ear tubes are surgically (myringotomy) placed to allow for normal airflow until the child grows and the eustachian tubes can function properly. 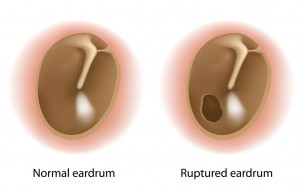 When damage to the middle ear or eardrum has occurred, more aggressive and complex treatment is needed which usually involves surgery. The type of surgery needed depends on the damage and the underlying cause. Surgeries are performed to eradicate the disease, to remodel the middle ear or mastoid bone, and to preserve or improve hearing.  Some surgeries to achieve these objectives include:

Each case is different and may require a different combination of procedures and techniques. Children are typically discharged from the hospital the same day or the day after surgery. Healing can take several months, and regular follow-up visits are essential to monitor progress. As with all surgeries, there are risks, but 90% of cases to repair the eardrum are successful. Occasionally, multiple surgeries are needed.